Deer Park is an upscale neighbourhood in Toronto’s Yonge and St. Clair area, known for its unique combination of high-end luxury homes, budget-friendly townhouses and condos. Beyond its convenient location, Deer Park offers a unique combination of natural beauty and urban chic, and attracts residents with its trendy and hip yet historic and refined atmosphere.

It is bordered by the Beltline Trail in the north, the Vale of Avoca section of Rosedale Ravine in the east, Farnham Avenue in the south, and Avenue Road and Oriole Parkway in the west. Deer Park is generally considered one of midtown’s most livable districts.

The land on which Deer Park is built was known to First Nations peoples as “Mushquoteh,” a word that describes an open pasture in the midst of a forest where deer come to graze. Its traditional abundance of deer inspired the neighbourhood’s name, which is derived from the district’s original estate, established by the Heath family in 1837. The Heaths christened their acreage Deer Park, after the herds of wild deer that roamed the adjacent fields when Toronto was still in its infancy.

By the 1850s, the Heath family’s 40-acre estate had been divided into 33 smaller lots, and numerous villas and cottages had been built on the surrounding lands. At that time, the small community also counted a school, a general store, a hotel, and a horseracing track among its features.

Toronto continued to grow and take shape around the Heath family’s original estate, and in 1874, the entire Heath acreage had been sold off. As the 19th century drew to a close, Toronto’s old Metropolitan Railway was making its way toward the neighbourhood, leading Deer Park to be annexed into Toronto by city officials in 1908.

Most of Deer Park’s oldest houses date to around 1875. By the 1920s, the neighbourhood had begun to evolve into its modern form. It won favour as a preferred residential locale for Toronto’s emerging upper-middle class, and entered a period of rapid development and modernization with the 1954 arrival of the TTC subway at the intersection of Yonge and St. Clair.

Many of Deer Park’s original houses still stand, with most being built between about 1875 and 1920. Homes dating to this era generally display characteristics associated with the Victorian and Edwardian architecture styles.

Many of the neighbourhood’s newer houses, condominiums, and townhouses were specifically designed to match the historic character of Deer Park’s existing residential buildings. The area features some high-rise developments, and in these buildings, residents commonly enjoy sweeping views of the downtown Toronto skyline or impressive views of the ravines and parklands that surround the district.

Deer Park offers a strong balance of houses, townhouses, and condominiums. At any given time, buyers will typically have a wide-ranging selection of each of these property types to choose from.

As an upscale Toronto neighbourhood, most of Deer Park’s detached heritage houses are larger and set on generously sized lots with yard space. Semi-detached houses are somewhat rarer than detached homes, but are still found in healthy numbers across the neighbourhood. First-time buyers and those seeking smaller, more intimate properties will usually migrate toward more recently built properties, or to the many apartment-style condos found throughout the area.

Deer Park is a family-friendly area that is also popular with young professionals and adults of working age. Recent census data indicates an estimated population of 11,600 people, with concentrations of children, youth, and seniors that align with citywide averages.

The approximate average annual income of a Deer Park household is about $110,000, and a very large majority (91%) of adult residents have completed higher education. Deer Park’s ownership-to-renter ratio is currently reported at 68% owners and 32% renters. 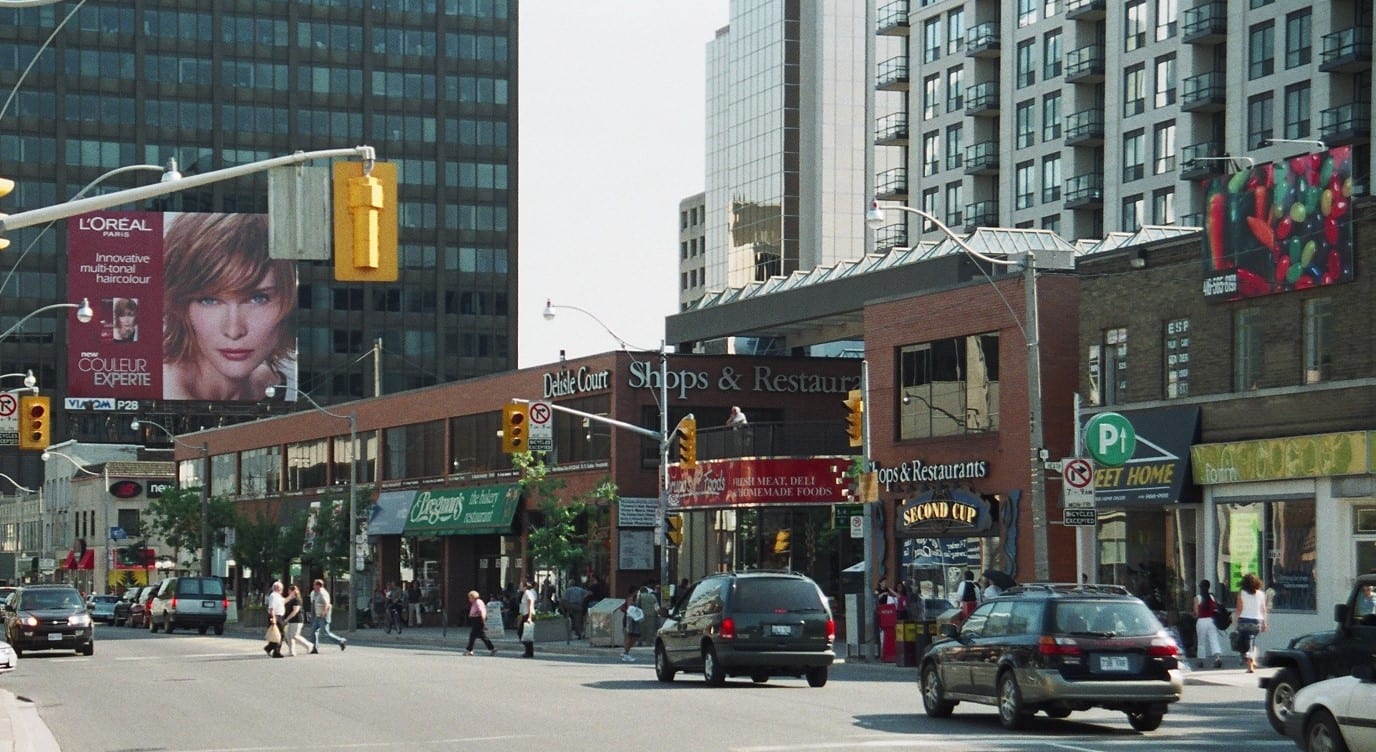 The intersection of Yonge and St. Clair is a thriving commercial hub, with an especially dense concentration of trendy eateries. Deer Park has been a major beneficiary of Toronto’s fast-evolving food scene, and many of its newer restaurants have become popular with gastronomy aficionados throughout the GTA.

Residents enjoy convenient access to authentic cuisines from around the world, with a varied array of establishments serving up flavourful fare including Chinese, Japanese, Thai, and Middle Eastern cuisines, among others. The neighbourhood also includes plenty of pubs, take-out pizzerias, and quick-service diners.

Most of Deer Park’s local retailers are of the independent variety, though the St. Clair Centre just east of Yonge Street is home to a choice collection of franchise stores. For a big-box shopping experience, residents can head west down St. Clair to the Stockyards shopping centre, which opened in 2014. Stockyards offers ample parking and a convenient collection of popular chain stories. One of Toronto’s largest malls, the Yonge Eglinton Centre, is also within walking distance of Deer Park.

While Deer Park is not known for its museums, it is home to the Muse Gallery, which is located a few blocks south of St. Clair Avenue at 1230 Yonge Street. This intimate studio and exhibition space specializes in contemporary fine art collections, and regularly features work by both emerging and established artists.

Situated a short distance from the southwest corner of Yonge and St. Clair, St. Michael’s Cemetery is an important and unique historic Toronto landmark. Established in 1855, it is the city’s oldest Catholic burial ground and houses some 29,000 gravesites. Surrounded by homes and buildings, St. Michael’s is accessible only via a narrow alleyway that exits onto Yonge Street.

One of the primary attractions of Deer Park is its excellent green spaces. The Beltline Trail abuts the neighbourhood’s northern boundary and features nine kilometres of walking, hiking, and cycling paths that creatively reinvigorated a defunct railway line.

Other major local parklands include David Balfour Park and Rosehill Reservoir, which meld together to form what many consider to be midtown Toronto’s most beautiful outdoor preservation area. On its upper level, the parkland includes peaceful seating facilities, walking and cycling trails, children’s play areas, a stunningly beautiful reflecting pool, and a tranquil waterfall. Staircases descend into the ravine’s lower reaches, which are so thick with trees, greenery, and dramatic natural scenery that visitors can easily forget they’re in the heart of Canada’s largest city.

Oriole Park is a favourite focal point of community activity, with tennis courts, picnic areas, a summertime splash pad, and excellent play facilities for children. The recently upgraded Neshama Playground is one of Toronto’s most inclusive and complete fun zones for kids with swings, climbing gyms, a merry-go-round, interactive musical features, and many other unique features.

The Yonge and St. Clair intersection features a Walk Score of 88/100 and a Transit Score of 87/100. Professionals who work downtown benefit from a short and easy commute, as a subway ride to Union Station takes less than 15 minutes.

The neighbourhood is served by the Deer Park branch of the Toronto Public Library, which is located at 40 St. Clair Avenue East.

Several of Toronto’s top private schools are also located in or near Deer Park:

Please note that private school admissions are governed by the internal policies of the individual institutions listed above. For further information, contact the school directly.

Toronto police used the property at 40 Heath Street West to conduct a stakeout targeting the infamous Boyd Gang, a criminal ring that conducted a string of brazen robberies and prison escapes during the late 1940s and early 1950s. The gang’s figurehead, Edwin Boyd, was hiding out at the house next door, and was apprehended in March 1952. Many years later, the prominent South African anti-apartheid theologian Archbishop Desmond Tutu stayed at the 40 Heath Street West property during an official visit to Toronto.

Famous former Deer Park residents include the likes of:

Jethro Seymour, one of the Top Midtown Toronto Real Estate Brokers, is a midtown Toronto residential specialist with over 20 years of sales experience in real estate, marketing, construction and publishing. He has helped many families find homes in Toronto’s great neighbourhoods, and has extensive knowledge of local markets, new home construction, resale home sales, and the condo market. Living in midtown Toronto, Jethro previews many of the homes that come to market for his clients and inventory knowledge. Jethro specializes in Midtown Toronto, Davisville Village and Leaside neighbourhoods.