Moore Park is among the most distinctive and desirable districts in Toronto. Unique among midtown neighbourhoods in that it is bordered on all sides by nature and green spaces, Moore Park lies just past Yonge Street, straddling the eastern reaches of St. Clair Avenue. It is situated north of Rosedale, east of Deer Park, south of Davisville and west of Bennington Heights.

Historically, Moore Park has been one of the city’s most exclusive neighbourhoods, and remains so today. Quiet, quaint and peaceful, Moore Park feels far removed from the hustle and bustle of the city, despite its convenient and central location. It tends to attract young to middle-aged working professionals, and has one of the highest average household incomes of any district in Toronto.

Moore Park is named for its founder and most prominent early citizen, John Thomas Moore, who was a successful entrepreneur, statesman and politician. In the 1880s, Moore began enacting his vision to develop the area into an exclusive subdivision. A central part of his plan focused on the construction of the Moore Park station of the Belt Line Railway, which was built during the 1890s.

Moore correctly anticipated that the train station would attract wealthy would-be landowners to the area, and by the turn of the century, the subdivision was experiencing a developmental boom. This boom continued into the 1930s, by which time the neighbourhood had evolved into one of the city’s most prosperous and refined districts – a character which it retains to this day. 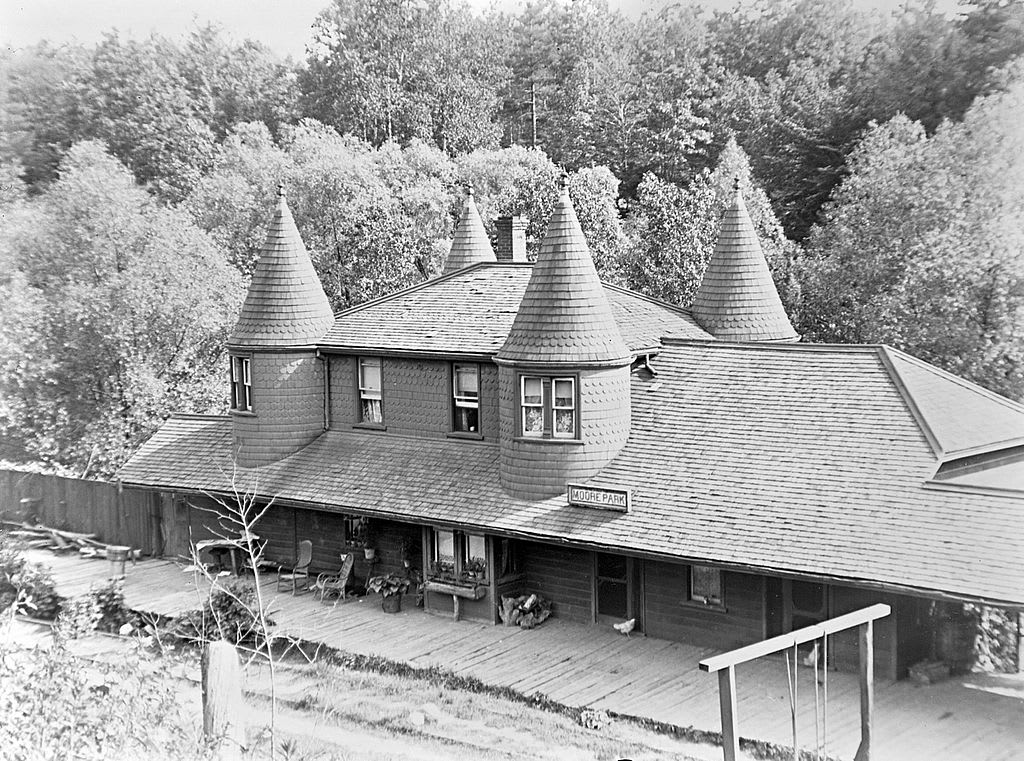 According to statistics compiled by the Canadian federal government during the 2006 census, Moore Park had a population of just under 4,500 residents and an average individual income of approximately $155,000 per year. Additional statistics amassed by the City of Toronto in the same year, which grouped Moore Park together with the neighbouring district of Rosedale, found that 57.5 percent of residents were between the ages of 25 and 64, with an average age of 39. People of Scottish, Irish and English descent dominate the neighbourhood.

The neighbourhood’s founder, John Thomas Moore, lived a tempestuous life and saw his fortunes swell and decline many times over the years. He wasn’t actually in Toronto to see his vision for Moore Park brought to full fruition, having left for Alberta in 1905, where he served as a Member of Provincial Parliament.

His will was notoriously acerbic and trifling, and he cut his sons out of what remained of his fortune and left everything to his second wife. His children subsequently squabbled over the will, but to no avail; the majority of Moore’s assets eventually went to the many creditors he had at the time of his death.

When Moore Park was being developed in the early decades of the 20th century, the English Cottage, Edwardian, Georgian and Tudor Revival architectural styles were very much in vogue, particularly among the wealthy. Thus, these styles dominate the neighbourhood; most of the homes which still stand today were built between 1905 and 1930.

The quintessential Moore Park home is a two-storey detached brick house; while some lots in the neighbourhood are generously sized, they tend to be smaller on the whole than those seen in other midtown districts. Some homes have private driveways, but shared driveways are fairly common in Moore Park. However, street parking is ample and always readily available. Many of the houses in the fringes of Moore Park back onto ravines and parkland, enhancing privacy and serenity.

Average home values in the area tend to be high; those looking for more affordable options are advised to concentrate their searches in the northern sections of Moore Park, where recently built duplexes and town homes are priced within easier reach. For current average sale prices, contact Jethro Seymour, a top Toronto Realtor specialising in upscale midtown neighbourhoods.

Motorists enjoy convenient access to both the Don Valley Parkway and the Bayview Extension via Moore Avenue. Moore Park is approximately 20 minutes from entryways to Highways 401 and 404, with easy connections to the 400 and 407 Express Toll Route.

Those who enjoy nature and the outdoors will find a lot to love about Moore Park; it is surrounded on all sides by greenery. Toronto’s famous and iconic Mount Pleasant Cemetery abuts the entire northern boundary of the neighbourhood, and the historic Canadian Pacific Railway tracks which are now part of the Belt Line Trail, run along its southern edge. Ravines extend off both its eastern and western sides, as Moore Park lies between the Vale of Avoca and Moore Park Ravines.

Moore Park Ravine is home to a wealth of wildlife, and features an 8-kilometre trail that winds its way through the gorges, following a tributary of the Don River into Mount Pleasant Cemetery and the neighbouring Rosedale Ravine.

Historic Chorley Park is another major outdoor attraction in the area, offering scenic views of the Don River Valley; it was formerly the site of the palatial residence of the Lieutenant General of Ontario, which was dismantled in 1960. 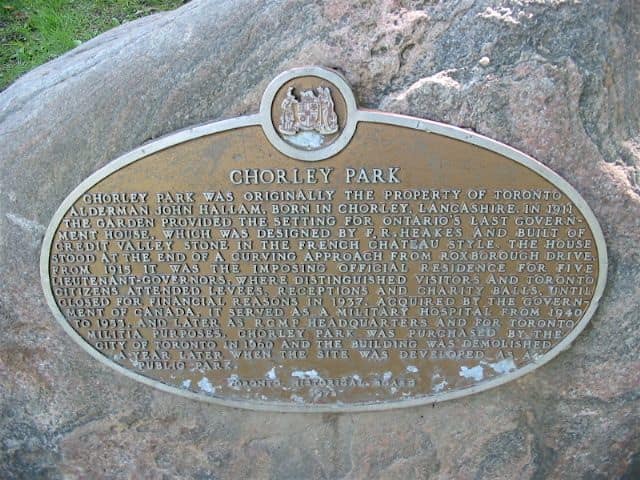 The Don Valley Brick Works, sometimes called Evergreen Brick Works, is also located nearby. This historic quarry has been converted into a landscaped park and leisure ground, with trails, ponds and unspoiled green spaces that are home to a wide range of fauna and flora.

David A. Balfour Park extends along the south-western edge of the Moore Park neighbourhood, and houses a diverse natural spectacle. Its southern end is home to a placid grove of ash and maple trees, and three paths wind their way through its eastern and western edges. The two paths on the western side of the park are well-maintained, offering excellent recreation for joggers, hikers and cyclists. The eastern path is flat and ideal for leisurely strolls and casual outings.

Todmorden Mills Park, Winston Churchill Park and Moorevale Park are also easily accessible from the Moore Park area. Moorevale Park is of particular interest to tennis aficionados, as it is home to and features five tennis courts for leisure use, as well as a baseball diamond and a children’s splash pool.

Mooredale House community centre is a focal point of local life, offering year-round sports activities, fitness classes, and arts and crafts. During the summer, Mooredale House also hosts a day camp for local children, and each May, it hosts Mayfair, an outdoor carnival with rides, games and fun for the whole family. Residents wishing to take advantage of Mooredale House are required to pay a small annual membership fee.

Located at 40 St. Clair Avenue East, the Deer Park Branch is the closest public library. It offers an extensive permanent collection of print, A/V and digital materials, as well as ongoing arts and education programs for adults, teens and children.

Given its location in the heart of one of the world’s most multicultural cities, dining options abound in the Moore Park area. In addition to gastro pubs and public houses in the true tradition of the British Isles, residents can take advantage of a range of ethnic and continental cuisines. Most of the neighbourhood’s dining establishments are concentrated along the Yonge Street and St. Clair Avenue corridors, with further options available if you want to venture to nearby major streets including Avenue Road, Mount Pleasant Road and Bayview Avenue.

With a population predominately of British, Irish and European ancestry, most houses of worship in the area centre on the Protestant and Catholic traditions. For residents of the Jewish faith, many synagogues can be found in the nearby neighbourhoods of Forest Hill North and Lytton Park, which lie just west of Yonge Street near Eglinton Avenue West.

Some of Toronto’s most prestigious private schools are in the Moore Park vicinity, including:

Would-be residents should be advised that admissions policies and procedures are set by individual institutions and may be subject to restrictions and geographic limitations. These should be fully investigated prior to moving to the Moore Park area.

Two excellent shopping districts – one at the intersection of Yonge Street and St. Clair Avenue, and the other at Davisville and Mount Pleasant – are popular with Moore Park residents. Both offer an extensive collection of clothing and jewellery boutiques, gourmet food stores, cafes, and house and home retailers.

John Thomas Moore’s vision for an exclusive district catering to upper-income Torontonians is very much alive and well today. With a long history as a prestige neighbourhood, Moore Park is home to some of the most desirable and valuable real estate in the city, with an excellent future outlook and the potential for a significant future return on investment.

Jethro Seymour, one of the Top Mid Town Toronto Real Estate Brokers, is a midtown Toronto residential specialist with over 20 years of sales experience in real estate, marketing, construction and publishing. He has helped many families find homes in Toronto’s great neighbourhoods, and has extensive knowledge of local markets, new home construction, resale home sales, and the condo market. Living in midtown Toronto, Jethro previews many of the homes that come to market for his clients and inventory knowledge. Jethro specializes in Midtown, Davisville Village and Leaside neighbourhoods.