Nestled in a stunningly beautiful yet blissfully quiet section of central Toronto, Rosedale has long held its celebrated status as one of Canada’s most exclusive and prestigious neighbourhoods.

For many Torontonians, a Rosedale address serves as proof that they’ve “made it.” This tranquil, tree-lined quarter of the city is home to some of Canada’s wealthiest and most influential citizens. Stately mansions and handsome estates famously fill its winding streets and charming avenues, with thick foliage and mature greenery shielding residents from the bustling hubbub of big-city life.

Located just northeast of the iconic intersection of Yonge and Bloor, Rosedale’s formal boundaries are traditionally contained by the Canadian Pacific Railway tracks to the north and Bayview Avenue to the east. Its western edge extends to Yonge Street, while its southern limits reach down to Aylmer Avenue, Rosedale Valley Road, and Bloor Street East.

Sheltered by sweeping ravines and scenic parklands, Rosedale is consistently cited as Toronto’s most desirable neighbourhood. It is generally agreed that no other contender for that title offers the same combination of classic elegance, quiet dignity, and historic charm.

Rosedale’s modern history is usually said to have begun in 1824, when the prominent lawman and parliamentarian William Botsford Jarvis acquired a 110-acre tract of land and established the neighbourhood’s original estate. His wife, Mary Jarvis, named the estate Rosedale, after the graceful riches of wild roses that were found throughout the adjacent hillsides.

Mary Jarvis had a noted fondness for walking and horseback riding, and her favourite routes through the then-unsettled countryside forged the zigzagging paths upon which Rosedale’s famously winding streets are now built. 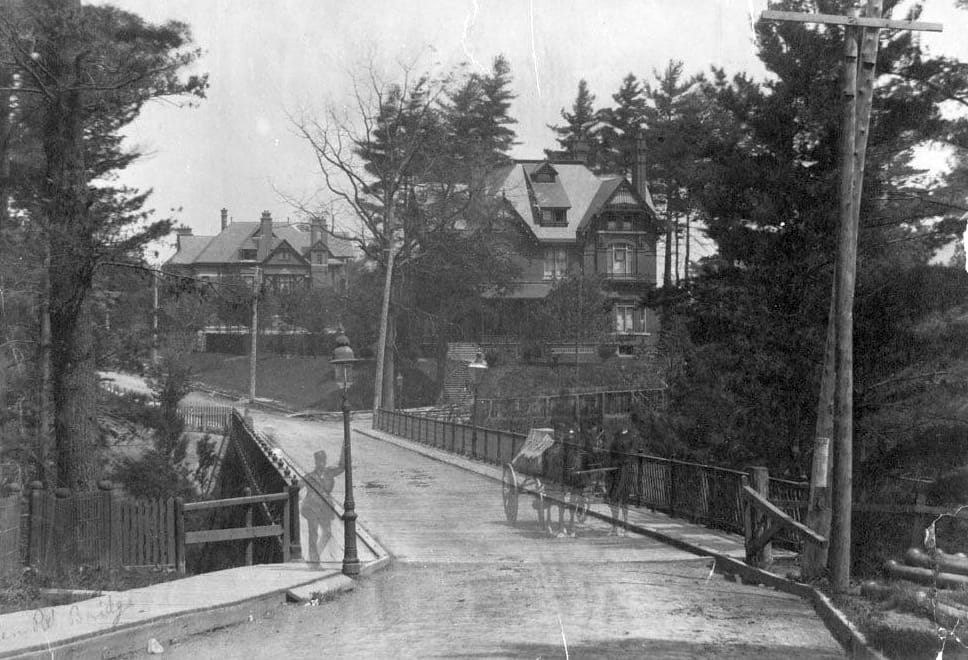 In 1864, the original Rosedale estate was sold off, and with Toronto fast emerging as a major commercial and population centre, the adjoining lands were subdivided into lots. South Rosedale appeared first, with North Rosedale evolving after the 1909 construction of the Glen Road Bridge, which traversed the deep Park Drive Ravine. Rosedale reached maturity during the early 1930s, and the present-day neighbourhood largely retains the same character it held nearly a century ago.

Rosedale’s architecture is noted for its refined and understated character. The neighbourhood has been notoriously resistant to change, which has allowed it to preserve strong elements of its historic appeal.

Most of its houses were built between about 1860 and the early 1930s, which is the reason that Edwardian, Georgian, Tudor, and Victorian architectural styles dominate the area. Beautiful red-brick mansions set on generously sized lots with mature trees are commonplace, and many properties also have amply sized front and back yards. Design elements and accents including gabled facades and wide porches supported by rounded columns are typical.

Many Rosedale homes are listed on the Toronto Historical Board’s official inventory of heritage properties. Owners of these properties face significant modification restrictions, as preservation efforts include limitations on the types of alterations that can be carried out on these homes.

Rosedale is mainly comprised of single-family detached houses, though there is also a strong inventory of semi-detached properties with more accessible price points. There are a few condominium complexes in Rosedale, several of which are clustered on Dale Street and date to the late 1940s. 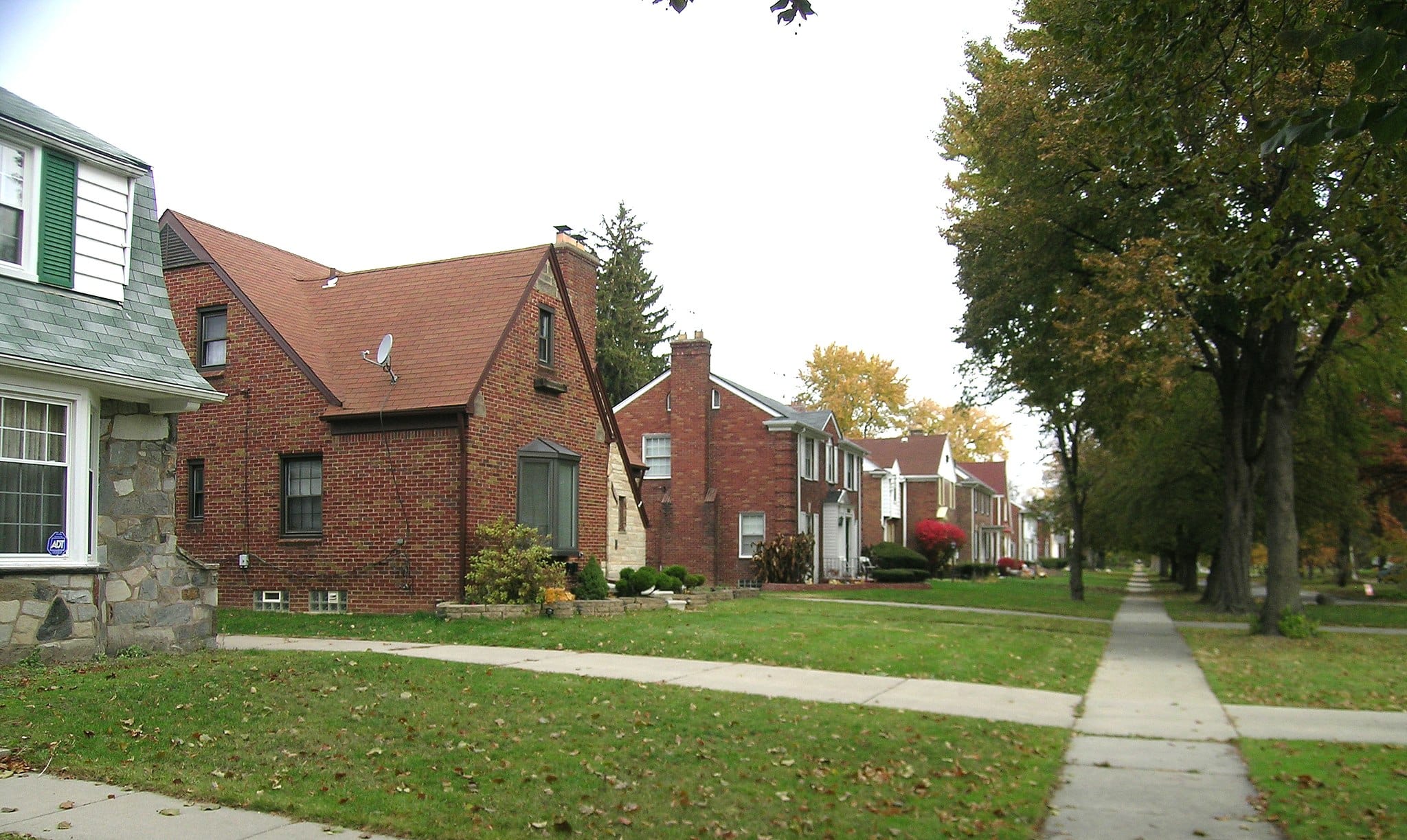 A 2016 proposal to build a new four-storey condominium residence on Dale Street makes for a good case study in contemporary Rosedale real estate development. A community meeting to discuss the proposal generated strong attendance, with residents voicing concerns over the proposed building’s height and its potential encroachment on adjoining heritage properties [8]   .

By and large, Rosedale’s real estate options are made up of older, well-maintained homes with classic appeal and timeless character.

Despite its reputation as a hotspot of “old money,” Rosedale is home to a more diverse population than popular perception may suggest. According to the most recent available census data, the Rosedale-Moore Park district of Toronto has a population of 20,923 with a five-year growth rate of +1.4% (2011–2016). Age breakdowns, along with comparisons to Toronto’s citywide averages, are as follows:

According to recent media reports, Rosedale’s average household income approaches $400,000 per year [2]   , and census data indicates that almost one-third of Rosedale-Moore Park households have an annual income of at least $200,000. However, it is worth noting that nearly half of Rosedale’s residents are renters rather than homeowners. This gives the neighbourhood a denser concentration of students, artists, and creative professionals than the raw income data might otherwise imply [3]   .

Poverty, crime, and unemployment are extremely low, while levels of community engagement are very high. [4]

While Rosedale itself is a heavily residential area, it is in very close proximity to the stylish and exclusive Yorkville shopping district that extends along Bloor Street west of Yonge. This stretch of high-end boutiques is sometimes likened to Manhattan’s famous Fifth Avenue. Here, savvy shoppers with discerning tastes can indulge their desires for the world’s finest clothing, jewelry, accessories, housewares, furnishings, and more.

Bloor Street also houses a wide range of stores and shops with quality merchandise that’s more accessible to budget-conscious consumers, as does Yonge Street. In short, Rosedale residents of all tastes and income levels are within walking distance of a rich and varied array of retail opportunities, with the Hudson’s Bay Centre at 2 Bloor Street East serving as a primary anchor of the district’s well-developed shopping culture.

Rosedale’s dining scene follows a similar pattern, with most residents migrating to the central hub around Yonge, Bloor, and Bay Streets when they want to eat out without going too far from home.

Toronto’s famous Yorkville neighbourhood, which is just across Yonge Street to the west of Rosedale, is particularly renowned for its celebrated collection of European-inspired fine dining establishments. Migrating to the intersection of Yonge and Bloor, and the other major streets around Rosedale, residents will also find a wealth of casual eateries, family-owned restaurants, and take-out places offering gastronomic delights from around the globe.

The Royal Ontario Museum (ROM) is the closest major museum to Rosedale. With its world-class collection of natural history, art, and cultural exhibits, the ROM attracts over one million visitors each year and has been a Toronto institution for over a century.

Midtown Toronto’s Casa Loma is another famous landmark located close to Rosedale; it’s just a few blocks west of the neighbourhood, near the intersection of Dupont Street and Spadina Road. This stately Gothic Revival-style castle with seasonal gardens is one of the city’s most popular wedding venues, and has been featured in countless movies and television shows. Its intriguing history, which extends back more than 100 years, has also helped Casa Loma secure its position as one of Toronto’s most unique attractions.

Given its location just north of Toronto’s central core, Rosedale is just minutes by car or public transit from all the city’s prominent downtown cultural attractions and institutions. Residents can reach the King Street theatre district, the Four Seasons Centre for the Performing Arts, Roy Thomson Hall, TIFF Bell Lightbox, the Art Gallery of Ontario (AGO), and many others in mere minutes.

Rosedale is particularly renowned for its well-preserved natural scenery, which surrounds the neighbourhood on all sides and create a zone of separation between the quiet enclave and the booming metropolis that encircles it.

In South Rosedale, the dramatic Rosedale Ravine Lands border Rosedale Valley Road, persisting as an eternal reminder of the area’s origins as a secluded and isolated aristocratic estate. The Don River runs parallel to Bayview Avenue along Rosedale’s eastern boundary, and its winding course is abutted by beautiful natural scenery that makes for a great place to walk, hike, or bicycle.

Next, the Park Drive Reservation Lands cut across the centre of Rosedale and house a beautifully restored meadow ecosystem and arbor-rich pathways. Craigleigh Gardens Park, located near the intersection of Bloor and Bayview, remains one of Toronto’s best-kept secrets, and the Chorley Park historic site in the neighbourhood’s northeast corner houses a few modest remnants of the Ontario lieutenant-governor’s mansion, which was controversially demolished by city officials in 1960. 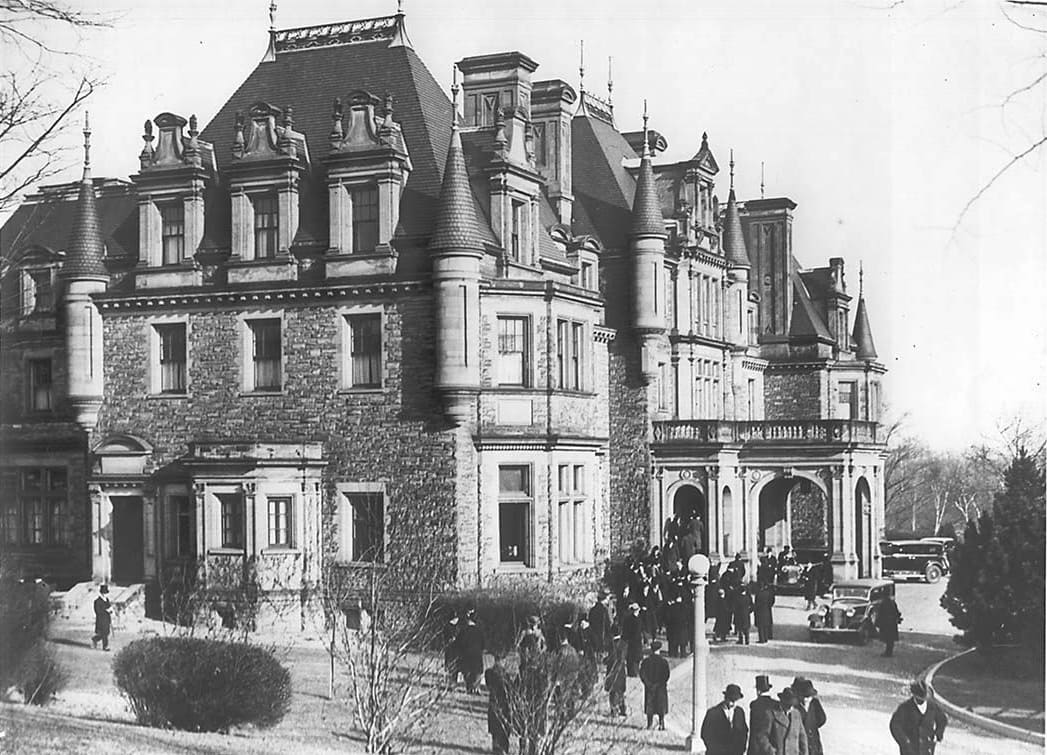 Rosedale Park is the neighbourhood’s main planned green space, with outdoor tennis courts and seasonal attractions including an artificial skating rink and a summertime wading pool for children. Tennis courts are also available at Ramsden Park, which is situated along Rosdedale’s western boundary. Lawren Harris Park is another popular local common, and takes its name from the celebrated inspirational leader of Canada’s famed Group of Seven artistic collective.

Rosedale residents have convenient access to some of Toronto’s top public and private schools. Nearby public elementary schools include:

Some of Canada’s most esteemed and exclusive private schools are also located close to Rosedale:

Prospective neighbourhood residents should remember that private school admissions procedures and policies are enacted and administered by individual institutions, and operate at their sole discretion. Interested parties are advised to contact the institution directly for school-specific information.

The University of Toronto’s main campus is a short walk, drive, or subway ride from Rosedale, and Ryerson University students can reach campus by taking the TTC subway to Dundas Station.

A wide range of professional services, including doctors, dentists, veterinarians, and law offices, are concentrated around the intersection of Yonge and Bloor. The Rosedale Family Health Clinic, which offers general family-oriented healthcare services, is also easily accessible at 600 Sherbourne Street near Rosedale’s southern boundary.

The Toronto Reference Library, located at 789 Yonge Street near Yonge and Bloor, is one of Canada’s top informational resources. While Rosedale itself does not have a Toronto Public Library branch, residents can access library services at the following nearby locations:

Rosedale is well-served by public transit, with several TTC subway stations including Rosedale, Summerhill, Castle Frank, and Yonge-Bloor within easy walking distance. Overall, the Rosedale-Moore Park neighbourhood has a Transit Score of 87/100 and a Walk Score of 84/100.

Given Rosedale’s long history and status as one of Canada’s wealthiest neighbourhoods, it’s no surprise that many famous people have called it home. Canada’s richest man, billionaire David Thomson, owns a luxurious Rosedale estate [5]   . In 2016, The Globe and Mail reported that a “high-profile musical couple,” whose identities have not been publicly disclosed, purchased the neighbourhood’s award-winning “curvy castle of calculus,” a unique architectural landmark that was listed for sale in late 2015 for a reported asking price of $19.5 million [6] .

Some other notable past and present residents include:

Interestingly, the Toronto Argonauts football team was originally based in Rosedale. The club played its first official game in October 1873 against their now arch-rivals from Hamilton.

Search Homes For Sale in Rosedale

Jethro Seymour, one of the Top Rosedale Real Estate Brokers, is a midtown Toronto residential specialist with over 20 years of sales experience in real estate, marketing, construction and publishing. He has helped many families find homes in Toronto’s great neighbourhoods, and has extensive knowledge of local markets, new home construction, resale home sales, and the condo market. Living in midtown Toronto, Jethro previews many of the homes that come to market for his clients and inventory knowledge. Jethro specializes in Midtown, Davisville Village and Leaside neighbourhoods.