Green, expansive, and peaceful, Lawrence Park consistently ranks as one of Toronto’s most desirable neighbourhoods. This exclusive enclave is one of the city’s oldest planned communities, and it’s well-known for its wide, winding avenues, generously sized properties, and tranquil green spaces.

Lawrence Park’s boundaries are traditionally defined by Yonge Street to the west and Bayview Avenue to the east. Blythwood Ravine and Sherwood Park define the neighbourhood’s southern border, and Lawrence Avenue East comprises its northern limit.

During the late 19th century, the northernmost portion of what is now Lawrence Park was owned by John Lawrence, a local farmer and tanner. In 1907, Wilfrid Servington Dinnick, the young president of the Dovercourt Land Building and Saving Company, formed a visionary plan to redevelop the area into a special type of planned community known as a garden suburb.

At the time, garden suburbs were very trendy in Dinnick’s native England. They were built on parcels of land surrounding large cities, and were intended to replicate the feel of country living, but in close proximity to well-developed urban areas.

Residents generally commuted to the nearby city to go to work, but enjoyed returning home to a quiet, green, peaceful environment at the end of the day. Becoming quite popular in Great Britain, the trend was imported to North America during the second half of the 19th century.

Dinnick envisioned Lawrence Park as a thriving garden suburb with strong appeal to urban professionals. Under his direction, the Dovercourt Land Building and Saving Company purchased Lawrence’s farming estate and hired the future founders of Sheridan Nurseries as landscape architects.

The land was subdivided into generously sized lots, and stringent developer guidelines decreed that every house in the district be a detached home built of brick or stone. These guidelines defined Lawrence Park’s distinctive character, with a network of winding roadways and manicured greenery rising around the neighbourhood’s stately houses.

Today, Sheridan Nurseries is still located on Yonge Street, and Lawrence Park is still home to a dense concentration of urban professionals who live in beautiful detached brick or stone houses situated on generously sized lots. It persists as one of Toronto’s most beautiful, historic, and in-demand neighbourhoods. 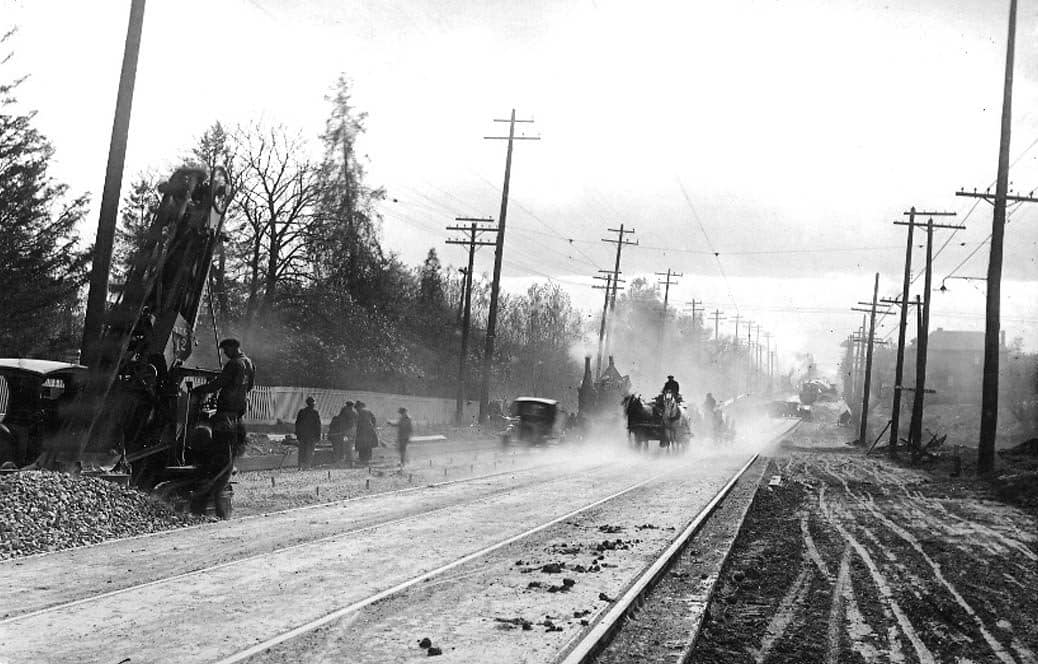 Most Lawrence Park homes were built between 1910 and the 1940s, and the neighbourhood is home to a range of architectural styles including Colonial, English Cottage, Georgian, and Tudor Revival.

While the specific stylistic characteristics of these architectural styles vary somewhat, they are generally defined by their classic elegance and old-world feel reminiscent of stately 18th and 19th century buildings of the British Isles. Decorative elements tend to be understated, and the vast majority of Lawrence Park home facades are built from brick, stone, or a combination of the two.

Most Lawrence Park properties are detached, single-family homes with private driveways, situated on ample lots with generous, landscaped front and back yards. When the neighbourhood was first under construction, houses were commissioned to be mid-sized, but in recent years, some owners have redeveloped their properties to feature large houses and mansions.

Apart from the high-rise developments along the Yonge and Lawrence corridor, condominiums are practically unheard-of in Lawrence Park. Semi-detached houses and row-style townhouses are extremely rare in the neighbourhood, but do exist in small numbers.

In 2011, Canadian Business magazine reported that Lawrence Park had the highest household net worth of any neighbourhood in Canada. While such statistics are subject to fluctuation, the impressive feat is indicative of the wealth and affluence that continue to define this enviable community.

Lawrence Park has one of the city’s densest populations of school-aged children, reflecting the neighbourhood’s popularity with well-to-do families. English is the first language of a reported 93% of Lawrence Park residents.

Census profile information dating to 2016 indicates a much higher-than-average household income, with well over one-third of Lawrence Park households reporting annual earnings in excess of $200,000.

Lawrence Park is unique among central Toronto neighbourhoods, in that shopping and dining establishments are relegated to its periphery practically without exception. This is due to a desire on the part of residents to carefully preserve Lawrence Park’s distinctive garden suburb character.

Lawrence Park, which is located south of Lawrence Avenue East and east of Yonge Street, is the neighbourhood’s flagship public green space. This wide, expansive, and beautiful parkland features a trio of clay tennis courts, as well as an on-site lawn bowling club and stunning, serene public gardens. Visitors can also access a footpath that leads into Lawrence Park Ravine, which is extremely popular with nature lovers. Walking, running, hiking, and cycling are ideal activities to enjoy in the scenic ravine.

Given its status as an upscale, family-friendly neighbourhood with an above-average concentration of school-aged children, Lawrence Park is well-served by an excellent network of private and public schools. Many neighbourhood public elementary school students are enrolled at:

Lawrence Park Collegiate Institute is the neighbourhood’s major public high school. It is located at 125 Chatsworth Drive, and is one of the city’s top-ranked high schools with a current enrollment of about 1,300 students. Northern Secondary School (851 Mount Pleasant Road) is also located nearby.

Many of Toronto’s top-rated private schools are found in or close to Lawrence Park, including:

Prospective residents who are interested in sending their children to private school should keep in mind that admissions policies are determined by the individual institutions. Contact school administration directly for specific enrollment and tuition information.

Lawrence Park is served by the George Locke Memorial Library, a district branch of the Toronto Public Library system. Founded in 1949 in memory of the system’s chief librarian from 1908 to 1937, the library is located on the southeast corner of Yonge Street and Lawrence Avenue East.

The TTC subway’s Lawrence station is located at the intersection of Yonge and Lawrence, and gives local residents immediate access to Line 1 (Yonge-University-Spadina) of the city’s subway system. It takes about 20 minutes to reach Union Station from Lawrence using the subway.

Lawrence Park has attracted many high-profile residents over the years, including:

Lawrence Avenue is named after the farmer and tanner who originally owned much of the land on which Lawrence Park is now built. The neighbourhood’s visionary founder, Wilfrid Servington Dinnick, is also the namesake of Dinnick Crescent.

Jethro Seymour, one of the Top Lawrence Park Real Estate Brokers, is a midtown Toronto residential specialist with over 20 years of sales experience in real estate, marketing, construction and publishing. He has helped many families find homes in Toronto’s great neighbourhoods, and has extensive knowledge of local markets, new home construction, resale home sales, and the condo market. Living in midtown Toronto, Jethro previews many of the homes that come to market for his clients and inventory knowledge. Jethro specializes in Midtown Toronto, Davisville Village and Leaside neighbourhoods.